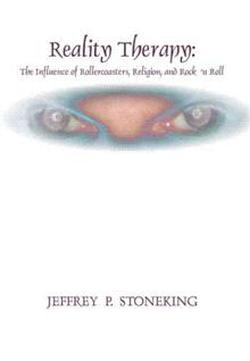 ​Mr. STONEking remembers it all for you on the ride called Life.  Join him through spiritual and physical transformations, where childhood wishes are fulfilled, and the challenge of over-coming obstacles is rapidly increased due to the act of forgiveness.

After being raised amidst abusive classmates and Mormon church members, Mr. STONEking discovers an existence filled with ancestral revelations and unexplained paranormal activities, with Rock ‘n Roll creating unique, influential soundtracks to a life few dare to undertake -- or survive!

Dreams do come true, and Mr. STONEking lives to tell them in his autobiography, Reality Therapy:  The Influence of Rollercoasters, Religion, and Rock ‘n Roll.

On-Going Sagas:  A Testimony of Events 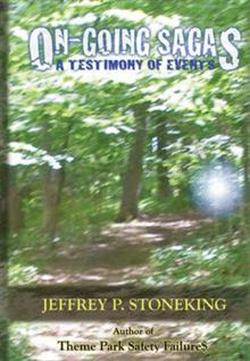 On-Going Sagas:  A Testimony of Events is a final submission for an Independent Studies course at Antioch University in Yellow Springs, Ohio.  Author Jeffrey P. STONEking's life has always been admittedly 'strange', earning him the title at school, "The New Rod Serling of Antioch", as Serling is a graduate.

"He may have written The Twilight Zone, but I am living it."

An inspiring, influential corporate executive shared a dinner engagement with STONEking in June of 2007.  That encounter led to the feverish writing of STONEking's epic autobiography, Reality Therapy:  The Influence of Rollercoasters, Religion, and Rock 'n Roll.

Once complete, a daily journal and log book was kept current, and STONEking was recognizing cyclical patterns, and inexplicable events coming into fruition.  Even deceased ancestors make their 'presence' known.

Those elements of intrigue, and the executive, are the focal points of a life in transition, and documented in On-Going Sagas:  A Testimony of Events.
BUY NOW 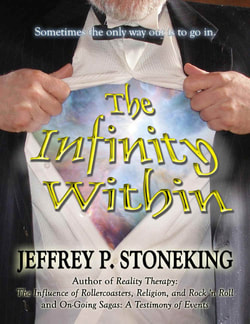 Glenn Lambert of Antioch University asked if I wrote my books, "or did they come through you?!"
"Like the others, this one also came through me, a method which Lambert enlightened me as to how Jonathan Livingston Seagull was written.  My flight above the flock to meet with The Father in prayer has led me safely on these journeys.  I feel like Moses coming down from the hill.  Humbly.
"You're Next!"

Mr.﻿ STONEking,  ﻿His life is his message.

Across distant waters, where bats flutter at distinct moments, Mr. STONEking takes you along his Path of Life. The Infinity Within also explores the After Life and how its dearly departed members interweave their presence in real time.
The recent departures of the parents of Mr. STONEking is uniquely entwined with the announcement and installation of the world's longest inverted rollercoaster debuting at Kings Island in 2014, Banshee.
The Infinity Within reminds us that we all are capable of manifesting greatness by The Law of Attraction. We must also remain alert to the many encouraging signs along the Path of Life.
BUY NOW